Industrial music was above all a statement of intent. A tool to express social discouragement and the call for rebellion against the concept of pre-established social norms. A claim to freedom.

While products like the Sex Pistols took over the mainstream, bands like Throbbing Gristle set the standard for authentic punk vibe, which became known as Industrial in the most underground environments.

Nowadays, industrial music does not exist. There are just few who have been able to be influenced by this music genre and mix it with styles such as EBM or Techno to create a modern and industrial sound. This is the case of Irazu, who we previously released a track on a VA for our sub-label Close Encounters; and who we now have the pleasure of releasing this ‘Love Crucified EP’.

This work overflows industrial feeling and at the same time it has its own character sounding actual, dense and hypnotic. The EP contains 3 original tracks and a remix by Yelling Meltdown; the new project by the producers Kastil & 30drop which work clearly reminds the sound of bands like Skinny Puppy or Front Line Assembly. 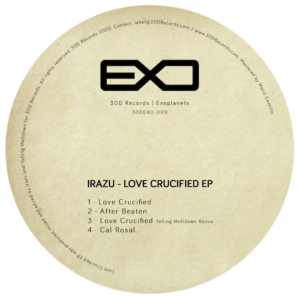