“The Soroban is a wonderful in-sight into the mind and craftsmanship of 30drop. The album requires open-mind thinking and the stretching of the imagination. We’re quite happy to have this exclusive creation of 30drop in the Escape Velocity catalogue at the Axis Shop. It compliments the concept and the objective graciously”.  – Jeff Mills 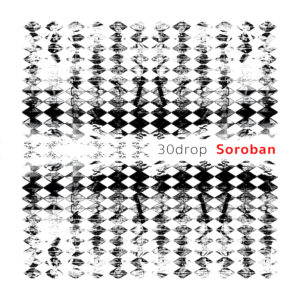 Contrary to what was previously believed, a scientific study showed that these abilities are not a consequence of the mind’s development, but rather the cause of said development. The ‘Washoe Project’ experiment, which consisted of teaching the gestural language of deaf-mute people to primates, concluded that due to this learning, their brains had evolved. This evolution is what the human mind has undergone to the point where it is today.

Just as the acquisition of language had a tremendous impact for the human mind, mathematics played a similar role, but at a much deeper and complex level, endowing the human being with very high capacities for abstraction, reflection, and lateral thinking.

The Japanese abacus called Soroban ‘そろばん’, is considered the first calculator in Japan and has played an essential role in the cultural and educational development of the country. Besides, its importance in the development of the right part of the brain (the one responsible for understanding and artistic creation), has been scientifically proven.

Thus, the Soroban has become a symbol of learning and an icon of mathematical language for today’s human civilization; as well as a standard of mathematics’ influence on the evolution of the human mind.

This LP is 30drop’s conclusion to his research, experimentation and learnings of the influence and importance of the Soroban in shaping the most abstract and deep parts of the human mind.

The 11 tracks that compose the album are pieces that, like the mind, evolve as a consequence of each other in an orderly way. Starting with the early origins represented by the track ‘Dunkelblau’ with which the album begins, going through ‘Go’-Dama’, ‘Tones’ and ‘Accepting The Future’, which represent the complexity reached by the human brain, and ending with ‘Symbiotic’ and ‘Time For Listening’. These last tracks present the maximum capacity for abstraction and reflection on everything assimilated and learned throughout the journey of this album and throughout human evolution.